We’re here not just with another backstage video but also with a brand new Swarovski Diamond Line edition! You’ll see some familiar faces in this post since it’s another collaboration with Creative Works, Vaneska Viskova and Elizaveta Shevtsova, which we’re very excited about!

Let’s talk about the video first – it was anything but ordinary but if you’ve seen our previous videos you’ll know Tami and Ondra from Creative Works always manage to come up with an unconventional idea that takes the video to a completely different level.

Our location was a chateau park Chyše and the plan was to shoot Vaneska and Elizaveta dancing in the park… but the little island in the middle of a pond was so tempting and before we knew it, a crazy and unrealistic idea was born. Only a few minutes later, we were trying to figure out how to take the pole and transport it to the island. Luckily, we were shooting with the Gympole Active Pole which can be placed basically anywhere and firmly put into the ground within minutes. We borrowed a small raft built from plastic cans and wooden plates and used it to transport the pole and the gear to the island. 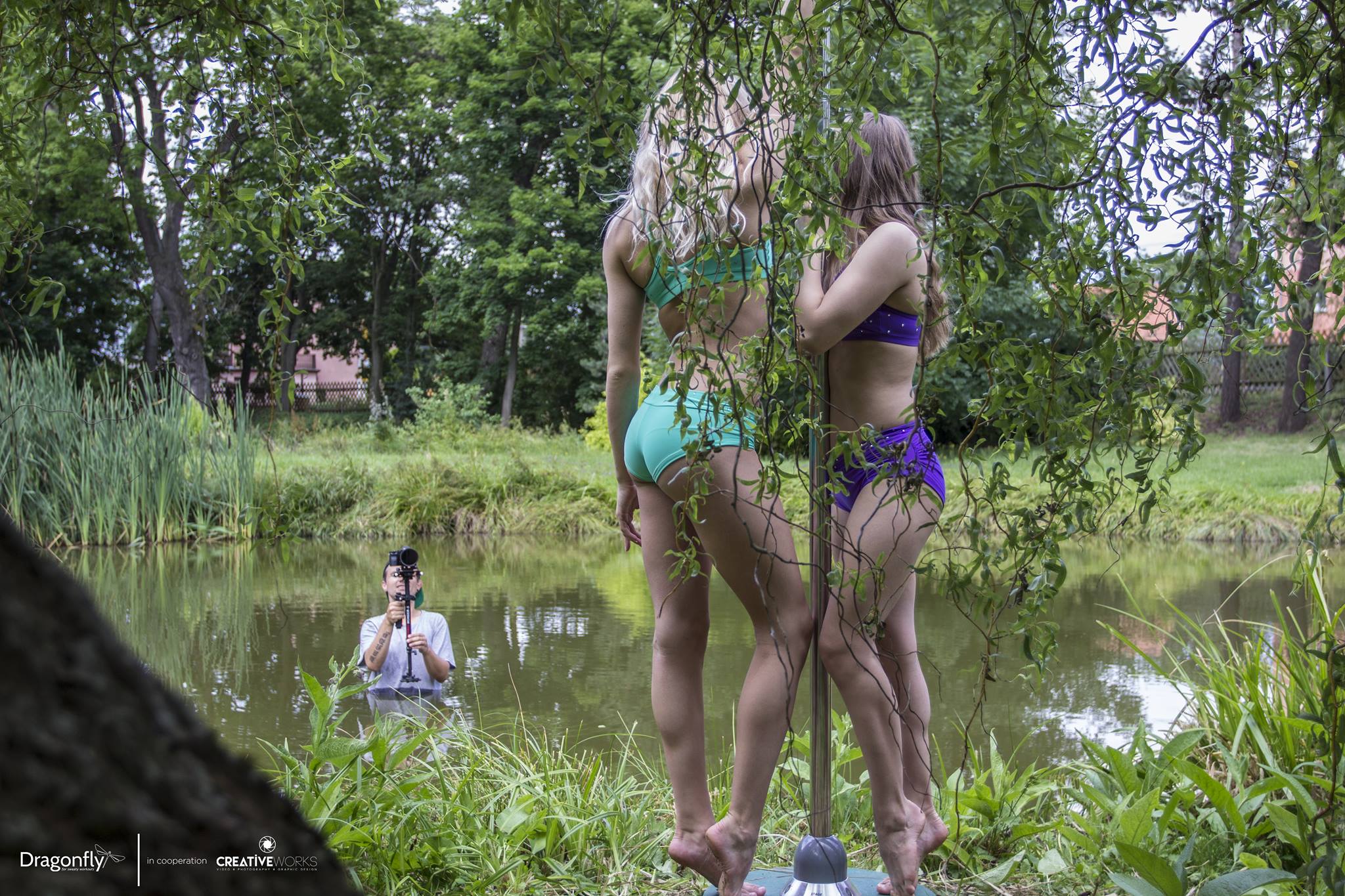 When we asked Tami to recap the situation, she said: „I’ll never forget Verca Dolanska’s face (the owner of Gympole), when we told her she’ll have to get on the raft with the pole and go to the island. It was extremely small and unstable. In the end, she had to go there and back so many times, she was an absolute pro when we were done the shooting, haha!“

Although we were shooting this during the summer, on that day it seemed more like an autumn. That also made shooting more interesting (not in a good way though), because the first drops of rain fell down before we even started shooting, which is not great when creating the scene took two hours. The whole afternoon looked something like this: everybody was hiding from the rain when it stopped raining, the girls quickly wiped the pole, did a few pole moves, Ondra was shooting for a few minutes and 5 or 10 minutes later everyone was hiding from the rain again. Not fun!

As you can see in the pictures, Ondra decided to get even wetter and took some shots from the pond, waist-deep in the water. Unfortunately, we had to leave early, because the storm that was coming seemed never ending but in the end, all the gear survived, Ondra, Vaneska and Elizaveta survived as well and you can see the final video on our Facebook!

The Creative Works team says thank you to Vaneska and Elizaveta, who were absolutely amazing, for their persistence, their determination to do the best work possible and for creating the video despite the weather. And we say thank you to the Creative Works team for coming up with yet another crazy idea, for making such a great video and for always going the extra mile, even when it means walking into the pond, haha! And of course we can’t forget a thank you for Verca Dolanska and Gympole – thanks to the innovative poles we can shoot videos like this in places we thought were impossible to reach.

Have you noticed what Vaneska and Elizaveta are wearing? These are the new Diamond Line sets in violet and mint and you’ll soon have a chance to buy them on dragonflybrand.com.  Tell us – which colour do you prefer – violet or mint?