The time has finally come and our Prismatic limited edition is now ready for you! And since you seem to love it as much as we do, we thought we could tell you a bit more about the shoot.

The whole shoot was in cooperation with Decadance studio and our model for the Prismatic edition was Jana Jagosova. She has been doing pole dance for more than three years, she trains in the Decadance studio 4 or 5 times a week (impressive!) and she has succeeded in many national and international competitions (she was in the final rounds of Pole Emotions 2014, Pole Theatre UK 2015, Pole Theatre Paris 2016 to name a few).

The shoot was managed by Jana Kozlova, the owner of Decadance studio and we were shooting inside the premises of Brno Exhibition Centre. The pictures were created by the talented Arina who is not only a photographer but also a pole dancer and who could take better pictures than a person who perfectly knows the sport? 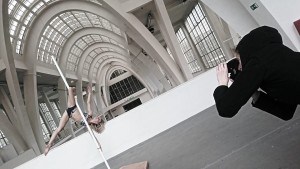 To be honest we are pretty impressed by Jana’s pole dancing and modelling skills since it was only 8°C and everybody was freezing even with more clothes on than Jana. But she is a professional and she managed to pose for three hours. She says: ” Arina said that she is ready, I undressed and she shouted “Action!”. That meant about 3 minutes on the pole followed by a warm tea, I put on my 3 layers of clothing back on and waited for my body to warm up a bit. But I really liked it. I enjoy extreme situation and this photoshoot was a new experience for me. Arina is a real professional, moreover she is a pole dancer, so I can‘t imagine a better cooperation between the photographer and the pole dancer.” And we couldn’t imagine a better cooperation either!

Have a look at some backstage photos from the shoot. How do you like the location and the final results? Let us know in the comments :).