Terri and Lisette will probably never stop surprising us with their incredible performances and new tricks for doubles pole dance. That’s why we were happy to see them at the Pole Expo in LA and together with PoleFreaks, we asked them a few questions.
So far they’ve won the World Pole Championship three times in the doubles category and they’ve been representing Ireland with pride. They also appeared on Britain’s Got Talent which was a great chance to introduce pole dance to more people. They keep coming up with new tricks, which, as they say, takes a lot of time… “We always want to come up with new stuff so it takes us a lot of time to create. It’s not only about mastering a trick but we want to make sure we’re creating something impressive or different.”
Terri first started with pole dance in 2008 and as she says, she wanted to do something fun that would get her fitter but also include dance and gymnastics and pole dancing turned out to be the perfect match. And does she have to say about trying out pole dance? “I’d definitely recommend the sport to everyone. Pole is amazing for overall strength and fitness. It works every muscle in your body and is amazing for toning your arms especially.” 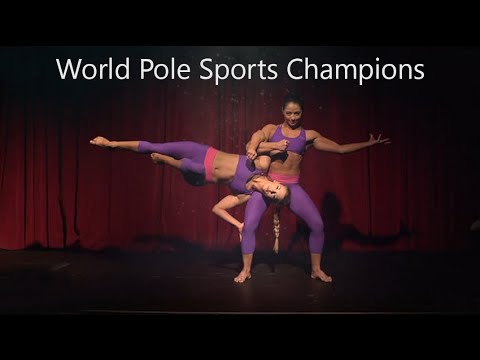 Lisette has been doing pole dance for six years and she discovered it after moving to Ireland from Venezuela when she met Terri. They realised they had a lot in common so they exchanged tips, tricks and found out that acro and pole are the perfect combination for doubles pole. This is where their amazing journey started and since then they’ve just been getting better and better, which is no surprise though when you hear about their routine.

PoleFreaks wanted to know what the average week looks like for these two: “We train three times a week usually two hours a day and coming up to competitions we increase that a little bit so we might train four times a week maybe three hours per day. A lot of our training time is creation, so it’s not always physical, sometimes it’s mental, spiritual, emotional :). We also train with our partners in our separate studios, we train with our students, we do a lot of private lessons and in the evenings we have lots of classes.” That sounds like a really busy week to us! Lisette and Teri also have some cool acro party tricks but to see those you’ll have to meet them at a party and have a glass of wine with them or watch this Dragonfly video :).

If you’re not following Lisette or Teri, you can find them both on Instagram and Facebook or using the hashtags #terriandlisette #lisetteandterri